It was time for another online event, the ACM International Computing Education Research conference (ICER). At ICER, I am also able to present my own work: my first first-author paper was accepted to ICER 2021. Way before the conference, I was already enthousiastic about sharing our work on SQL misconceptions with the community. Then, we received an email that the paper had received an Honarable Mention. Now, I was even more excited.

ICER is being held online, on Clowdr. This platform is new to me, but the conference organizers provided us with some instruction videos, and the webpages looked fairly nice. Presentations for the conference were prerecorded, which allowed for some async activity. I used this to my advantage, and watched a few videos before the conference started. Each video had it's own page on which you could communicate with the authors and other viewers directly. This meant that I could ask questions of other authors already, and they could ask question for our paper too. Following the conference chairs' advice, I posted a welcome message on the page of our paper welcoming any viewers. This also gave me the opportunity to invite SQL educators for a follow-up study (if you are interested, send me a message).

Every day of the conference starts with virtual rooms to have opening coffees together. On monday, I was a bit hesitant to join. Most rooms were empty, with a few containing a lot of people that I did not know, seeing as this was the first time I joined ICER. I decided to only hop in once the real opening started.

In the opening, we received some information on how the conference would go and a short introduction to Clowdr for those who had not seen the videos. Then, I was surprised to see that the organizers mentioned the Best Paper and Honerable Mentions (four papers in total), which means my paper was already in the spotlight for a few seconds. Three hurrays for visibility!

We moved on with another set of social rooms, this time specifically for the purpose of welcoming everyone. I thought the set up was fun: there were rooms for all (most?) locations that ICER had even been held in. Attendees were then asked to go to the room of the first ICER they had attended. First-timers chose a room that looked interesting to them. This did give a bit of a choice overload. I hesitated for a bit and then went for Lugano, where ICER will be held next year. Hopefully, this will be the first ICER I attend in person! 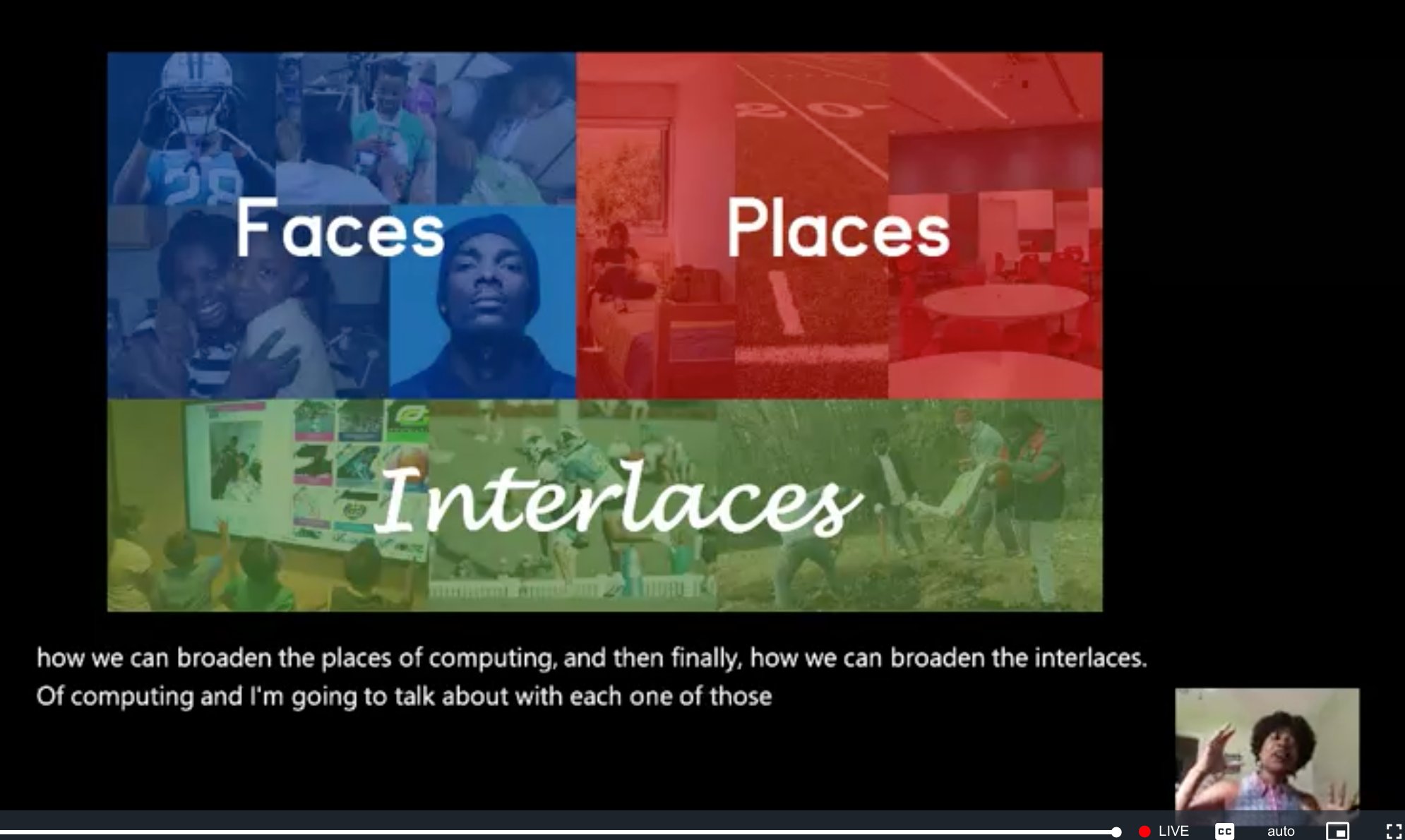 After the welcome rooms, it was time for the keynote by dr. Tamara Clegg. She explained to us how communities support learning in various ways. Her work with various communities helped people come into contact with STEM outside the classroom (or inside the classroom but in non-traditional ways). She argued we could make STEM and (more specific to ICER) Computer Science more accessible by broadening faces, places and interlaces:

For computing specifically, as researchers we need to be careful to use various study methods. We can't uncover unconventional methods of working with closed questionnaires.

After another break, in which I stepped away from the screen, it was time for the first paper session of the conference. There were two parallel tracks, Shrimp and Grits. I attended almost the full conference in Shrimp, as it had the papers that matched my interests best. This evening, Shrimp had two papers available to me:

Then, there was a discussion of these papers in random break-out groups. I think this is a great idea, as some questions can be answered within the groups already. We came up with one question for Jean Salac of paper 1 before the rooms closed. This approach led to more polished questions, and possibly to cleaner answers too. Also, it increased the interactivity of the day and generated discussion.

The day ended with a set of lightning talks from the participants of the Doctoral Consortium. It was a great introduction to these people, and some of their talks drew my attention. I wrote down a bunch of names and will be examining their posters and profiles in more detail tonight.