Alice and Eve was back! This event that I wrote my first post on last year, got postponed from April/May to November 2021. So, we had to wait quite a long time, but in return, the event was actually in person! Last Friday, the day was finally there, and three of my colleagues and I went to Nijmegen.

The program contained 6 half-hour keynotes of researchers in different career paths. There was a PhD candidate, a post-doc, two industry researchers and two professors. Each of them told us something about their work, as well as a reflection on their career path and personal life. On top of these sessions, there was a panel on AI & Me, and a poster competition. Of course, the Alice & Eve exhibition had come to Nijmegen too. You can visit the exhibition digitally here. 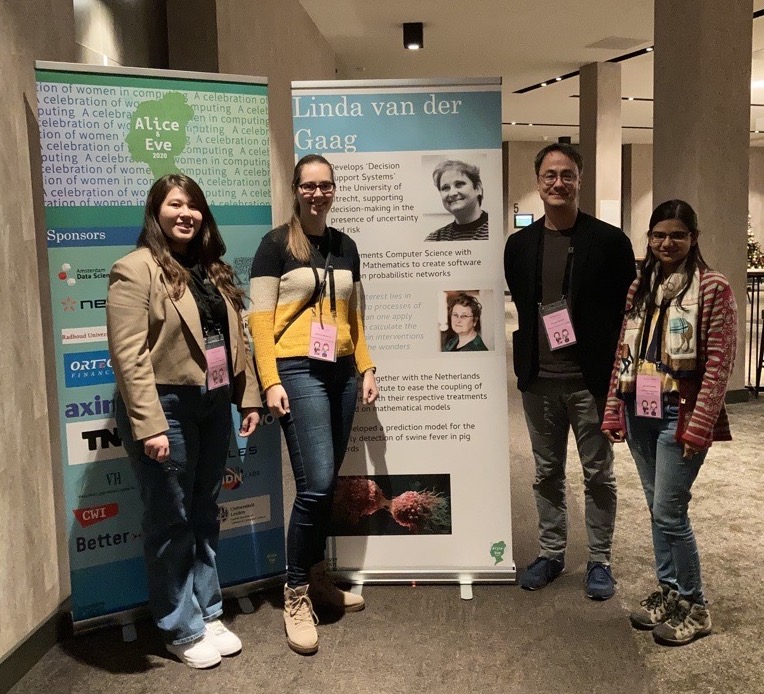 My colleagues and I with the banner of Linda, who is one of our colleagues.

The first talk was by Christine van Vredendaal, about security in the post-quantum computer era. She started by sharing some insights into her choice between academia and industry. I learned you can keep moving the decision forward by doing postdocs (not really, ha). Security and Quantum Computers are not really something I know anything about, but I gained some basic insights, including why it is important we consider this topic now.

The second talk was by Jasmina Omic, who started off by telling us that in her homecountry, there was no such thing as "Engineering is for men". Women need a well-paying job as much as men do, and Engineering is a well-paying job, so it is a good career path. She had never felt this divide until she started working in the Netherlands in the field of Security. But, she kept going and gave us some inspirational material to take home. This was strengthened by the fact that she was actually giving the talk together with her baby son. Very empowering!

The next talk by Emma Gerritse was on bias in information retrieval. I had some knowledge on this beforehand, but the examples she showed were still interesting (and shocking), and here memes were on point. Bert is still haunting me, ha.

The talk by Gemma Catolino was closer to my own research topic, in that it was about Humans and CSE. Her talk was on Human Factors in Software Maintenance. I learned about community smells, technical debt and social debt in Open Source Software. The effect of issues in the community on the code quality is large, and the cost is high. Personality matters, as does gender. This can probably be generalized to all types of business, we should aim for mixed teams for better performance.

The next talk was by Thorsten Holz, who told us more about the research process in his group. His idea that everyone should work on two projects, and should work together, was very interesting. In our group, there are people who work semi-together in the same project, but not everyone does. He also talked about their typical paper timeline, highlighting that many things would be rejected initially. He stressed that you should not treat the writing process as 'fire and forget'. This means to submit and not work on the project anymore after the deadline. I guess this depends on what your project is, his focus was mostly on implementation. My work is more theorethical, and 'fire and forget' actually is the way I work right now, but I will reconsider this.

The final talk was by Nele Mentens, about how efficiency and agility are key properties of both her work and personal life.

Although the venue was not very well-suited for a poster session -we had to tape them to the wall, directly next to one another- us poster presenters made it work. The judges came by the posters one after the other, so we did not have to discuss at the same time. Unfortunately, this setup was not very convenient to discuss your work with other attendees, so I only conversed with a few people besides the judges (plus the only poster session was during lunch). Overall, this part of the event could have been set up a bit better. 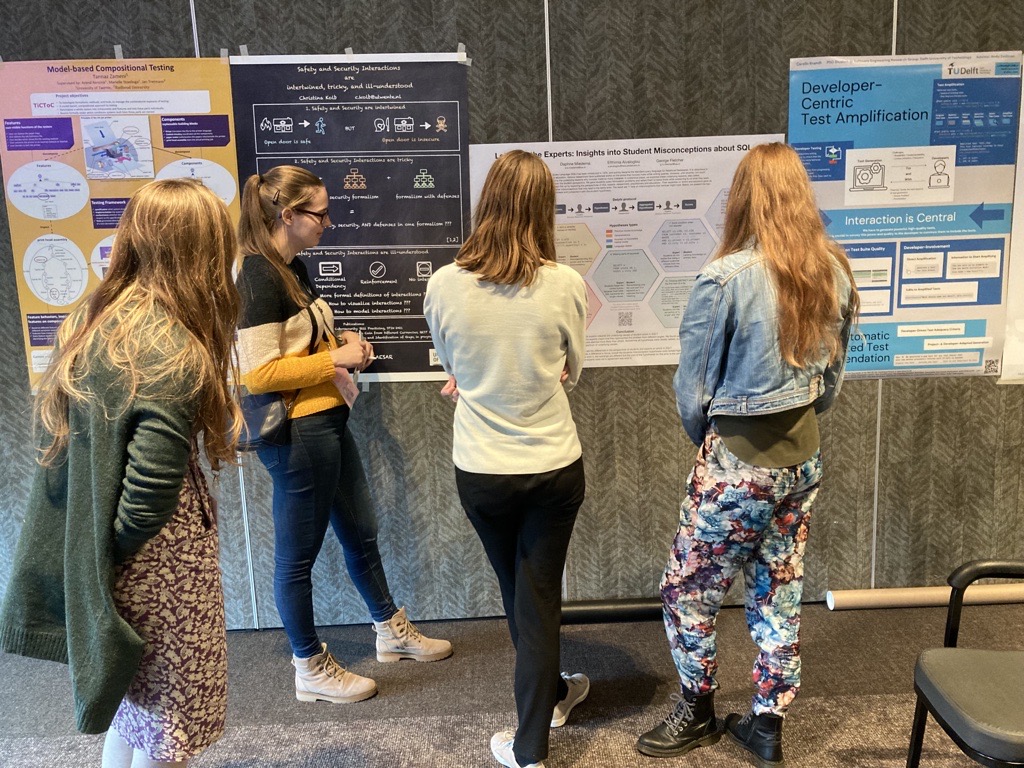 Presenting the poster to some other attendees.

In the competition, I presented a poster on SQL Misconception. In contrast to our ICER paper on students from this summer, this work focuses on experts' perspectives: educators, researchers and practitioners. The research itself is currently under review at a Journal, but I could already present some of our findings. You can find the poster on my Publications page.

There were two prices available for the 13 poster presented. The first was the jury prize, the second was determined by audience votes. I was honored to be awarded the latter, especially given the setup of the session. 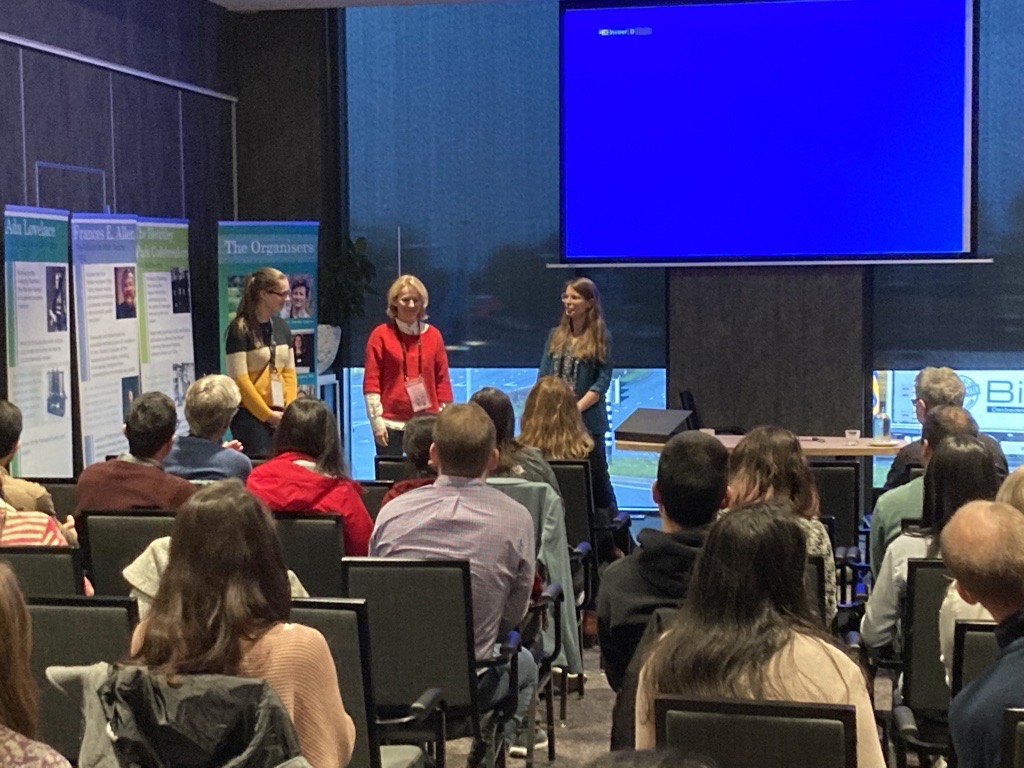 I won the audience choice award.

The day was rounded off with a panel, which was more of a comedy show than a panel, which made it very entertaining. The panel did not contain much discussion, but more sharing of ideas. Overall, it was a nice, light, end of the day. After some drinks, my colleagues and I went back to Eindhoven.

Overall, Alice and Eve was a great event again this year, with many interesting talks. I hope there will be another version next year. Many thanks to the organizers for their work on setting up an offline event!